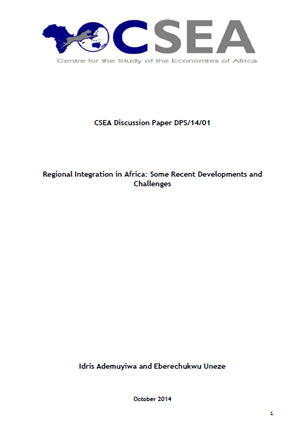 Regional Integration In Africa: Some Recent Developments And Challenges

African countries have been left out of the recent benefits accruing from international trade. For example, they accounted for only 3.2 percent of world trade in 2013 compared to 5 percent in the mid-1960s. Regional integration can reverse this weak performance as it holds the promise for countries to gain from the resultant economies of scale and enhanced competitiveness. It will also help to expand the markets for foreign direct investment.

Similarly, apart from assuaging Africas greatest economic problem (i.e. the high incidence of poverty), regional integration will go a long way in addressing non-economic problems like recurring conflicts and political instability as well as weak bargaining power in the multilateral front. It is in recognition of these potentials that all countries in the region belong to at least one regional economic community (REC). In fact, the plan is to merge and consolidate the RECs in Africa to form the African Economic Community (AEC) over a period of 34 years in six phases. While these efforts are timely and have begun to yield sparse successes in terms of deepening integration and improving the wellbeing of Africans, some challenges remain.

This article attempts to identify some of the achievements that have been made in regional integration in Africa as well as areas where challenges remain. It also attempts to examine the roles that the BRICS (Brazil, Russia, India, China and South Africa) can play in the integration process.

OPEC basket price increased (Week-on-Week) by 1.6 percent to $49.45 per barrel on March 31, 2017- the first increase recorded in three weeks. Also, Bonny light rose by 4.7 percent to $51.92 per barrel. The rise in crude oil prices reflects demand-side expansion, consequent upon a myriad of factors: slower rise in USA crude reserves, huge supply disruptions in Libya, and the prospective extension of OPEC supply cut deals in member countries. The strengthening of crude oil price amid calm in the Niger Delta oil region, presents positive outlook for the Nigerian economy. However, given the adverse implications of sole dependence on crude oil revenue, the government should avoid returning to the norm and make efforts to intensify investments in other key sectors of the economy

Recently released population estimate figures by the Nigeria Bureau of Statistics, show a significant increase in Nigerias population, based on the 2006 census. Notably, total population grew by an estimated 40 percent from 2006, to 193 million persons in 2016. Also, disaggregate demographic data from 2007 to 2016, reveals an increase in the number of males (74 million to 99 million) and females (71 million to 95 million), with a 2016 gender (males to females) percentage ratio of 51:49. The high rate of population growth can be attributed to the improvements in average annual rate of natural increase the difference between crude birth rate and death rate. As in preceding years, the composition of children and youths make up the highest share of the population growth. This presents a potential increase in the rate of labour supply. Going forward, there is need for the government to support rapid job creation in order to check the potential upsurge in unemployment rate.