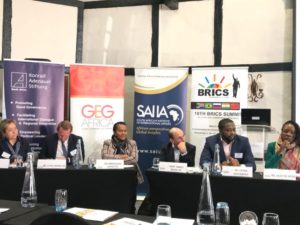 Ahead of the 2018 BRICS Summit, The South African Institute of International Affairs with National Treasury, the Global Economic Governance Programme and the Konrad Adenauer Foundation hosted a high-level conference BRICS and Africa: Navigating Global Economic Turbulence Together.

The event featured two high-level panel of discussions. The keynote panel  reflected on the implications for African and developing countries of the changing global geo-economic context. The second panel session brought together different stakeholders from Africa to examine the achievements and challenges of the bloc specifically focusing on the BRICS’s engagement in global economic governance forums. It also addressed the question of whether the BRICS have a coherent engagement strategy with Africa and whether there is room for the BRICS to engage more closely with each other within the BRICS grouping on their bilateral African engagement strategies.

The conference concluded with a panel discussion that considered perspectives from different BRICS countries on how to navigate the current wave of global turbulence, looking at what is next for the BRICS in its second decade. The event held on July 24, 2018 in Sandton, South Africa.

DECLINE AND FALL? - The crisis of the global fossil fuel industry and outlook for Nigeria

YOUTH, PEACE AND SECURITY IN AFRICA: THE MISSING PIECE