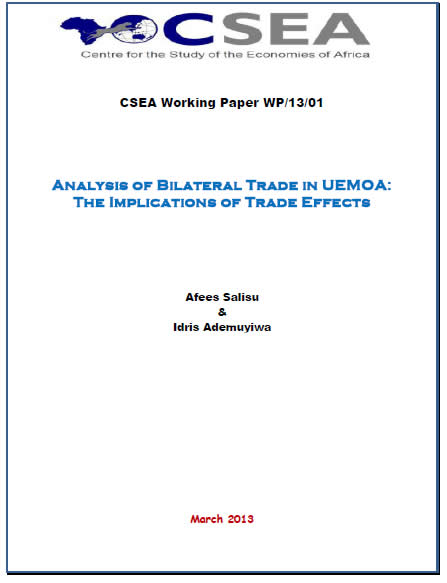 The paper examines the
implications of trade effects in bilateral trade drawing evidence from West
African Monetary and Economic Union (UEMOA). It also discusses the importance
of political stability to trade in ECOWAS countries.

The naira continued its downward trajectory in the review week. Specifically, naira depreciated significantly at the parallel segment by 3.5 percent to a record low of N440/$ on September 23, 2016. Notably, this was driven by the worsening liquidity constraints at the interbank market which left the excess forex demand to be sourced at the parallel market, and thus exerted downward pressure on the naira. The naira is likely to further weaken given that most of the liquidity constraints are exogenously determined and thus forex supply will likely remain subdued by its demand.

Estimating the Economic Impact of Chinese BRI Investment in Africa

Latest monthly economic report by the CBN reveals a decline in foreign exchange flows through the CBN. Foreign exchange inflow through the apex bank, dropped Month-on-Month by 21 percent to $2.3 billion in May 2017, occasioned by the fall in from Oil and Non-oil sources during the month.